Mentions of Kyiv and Ukraine removed from Russian schoolbooks: "We have a task to make it look as if Ukraine simply does not exist"
23 April 2022, 21:58 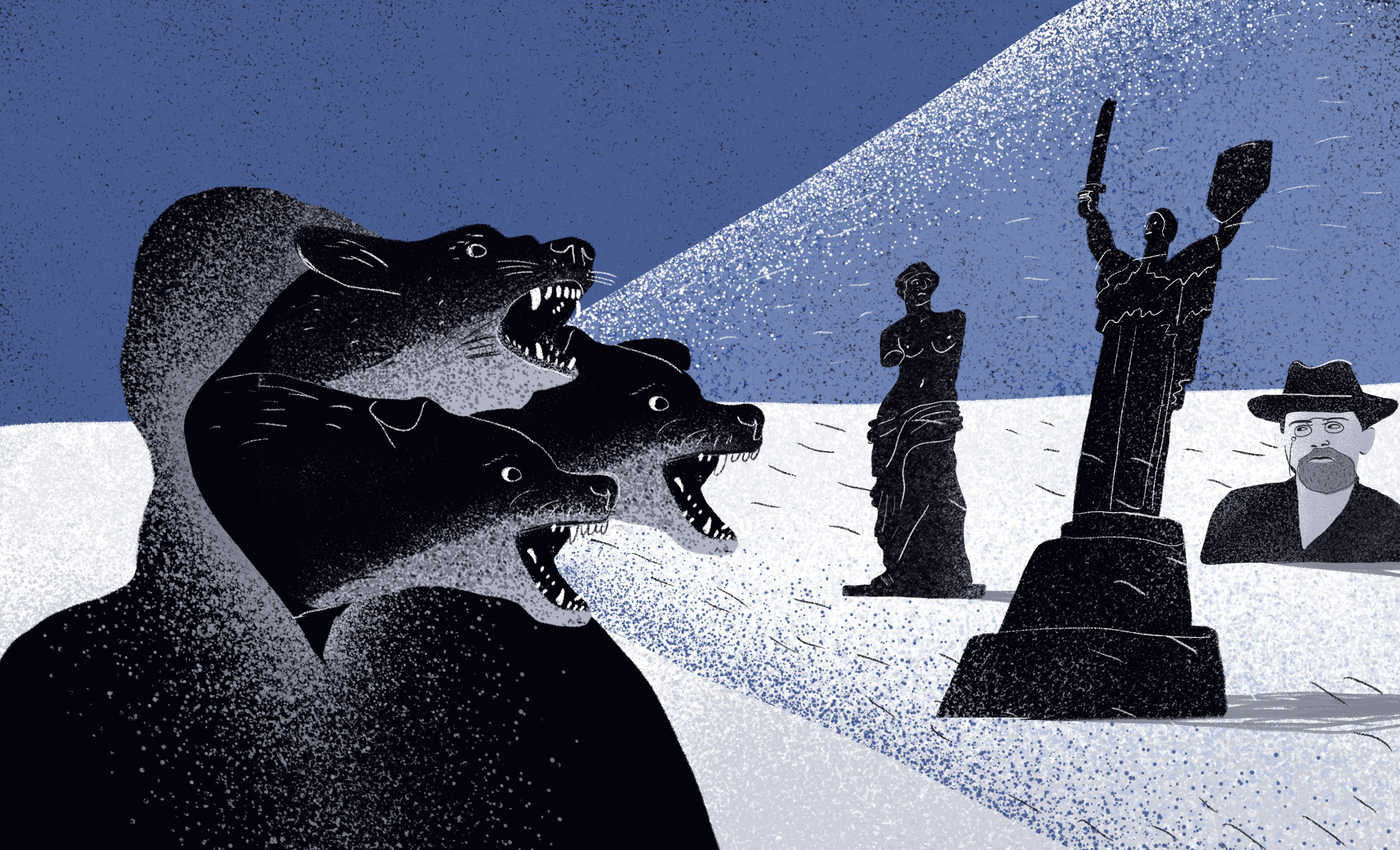 On February 24, Vladimir Putin announced the beginning of his "special military operation", and the Russian troops invaded Ukraine. Shortly thereafter, employees of the Prosveshcheniye group, one of the country's largest and oldest publishers of schoolbooks, were asked to remove "inappropriate" references to Ukraine and Kyiv from all school textbooks. Mediazona learned how the editors scrap Ukraine out of history, geography, and literature textbooks.

After the war in Ukraine broke out, the staff of Prosveshchenie (literally, Enlightenment in Russian) was tacitly ordered by the management to reduce the number of references to Ukraine and Kyiv in Russian school textbooks to a minimum, said three editors of the publishing house. All of them asked for anonymity; the request to remove “inappropriate” references to Ukraine was conveyed at a «confidential» meeting. Moreover, they explain that every Prosveshchenie employee has to sign “a great number of non-disclosure agreements” or risk immediate firing.

According to the editors, since the war broke out, anyone taking an anti-war stance-signing petitions, posting on social networks, or participating in protests-can also be fired. “We are a publishing house that prints books that influence the minds of the younger generation. Please refrain from using social media to voice a point of view that is different from the official one,” one Prosveshchenie employee recounts the management's position.

The editors are convinced that their bosses are ready to make good on their threats. Previously, people were fired over their political statements on social media: one of the editors from the history textbooks department lost his job over a Facebook post. “No one forced you to get this job, so if you are not satisfied, feel free to resign,” they are being told.

Mediazona sources stress that internal workings of Prosveshchenie are “very formulaic” — there is a constant stream of paperwork. Still, the staff finds their work important and rewarding, “that's why they are so afraid of losing it”.

Until 1991, Prosveshcheniye was the USSR's principal educational publisher, but then it lost its textbook publishing monopoly. The state-owned publishing house suddenly had several major private competitors. In the 1990s and early 2000s, the choice of textbooks for schoolchildren was up to the teachers, and parents usually paid for them, while the state only maintained a list of recommended literature.

In 2011, Vladimir Uzun and Oleg Tkach, the founders of the Olma Publishing Group, acquired Prosveshchenie with the help of billionaire Arkady Rotenberg, an old friend of Vladimir Putin. In 2013, the Rotenberg became the chairman of the board of directors and co-owner of Prosveshchenie.

Meduza reported that the state became the publishing house's primary customer almost simultaneously with the arrival of Rotenberg. The Education Law adopted in 2012 made it mandatory to supply schoolchildren with textbooks at the expense of the state budget, and the Ministry of Education made the textbook selection rules more stringent. As a result, there were fewer and fewer publishers whose books could be included in the federal list of recommended textbooks.

In the years that followed, Prosveshchenie bought several competitors, government contracts went from three to nine billion rubles, and revenues doubled from eight to 16 billion. “Now the publishing house receives almost 80 percent of the state money that goes to buy textbooks,” wrote Meduza three years ago.

No more of Kievan Rus

The editors of Prosveshchenie were ordered to reduce mentions of Ukraine and Kyiv to a minimum on the very first day of the war, February 24.

Mediazona sources recall that the textbook writers and editors tried to mention Ukraine as sparingly and cautiously as possible after 2014. But even after years of “scrubbing,” the war in Ukraine forced the editors to censor “an additional 15% of all texts,” according to the editors.

For example, a few years ago, it was strongly recommended that the Ukrainian flag be removed from the chapters describing the heraldry of different states and replaced with a flag of some other country. If a chapter needed an example of a capital city, Kyiv was to be replaced with another capital city name. “A couple of times we had to remove the U.S. flag as well, but it's easier, because our syllabus pays little attention to world history,” says one Prosveshchenie staffer. Now the editors have to remove mentions of Ukraine wherever possible.

“That is, we have a task to make it look as if Ukraine simply does not exist,” says their colleague. “It's hugely problematic when a textbook simply has no information about a country. A child grows up without any knowledge about this country, it would be much easier for them to believe the TV”.

It is particularly challenging for those who work on history textbooks: removing references to Ukraine and Kyiv without compromising the quality is often impossible, so editors have to work around with wording alterations to play “safer”

“But if possible, it is better not to mention Ukraine at all. Now the textbooks mention Kyiv mostly in the context of Kyivan Rus and the liberation of the city during the Second World War,” one editor says.

He insists that the context is important: “We are free to describe how the Soviet army saved Kyiv, but independent Ukraine is out of the question.”

“We acknowledge the fact of Kyivan Rus’ creation once, and then we just call it Rus. And Kyiv is its capital,” explains one Prosveshchenie staffer. “As strange as it may sound, ideally we should change the line ‘Prince Vladimir baptised Kyiv’ to ‘baptised the capital’.”

Sometimes editors come up with new wording to reference Ukraine, but in most cases the bosses would just pass down whole paragraphs: “Our job is to edit the officialese out”.

Sections about Nestor the Chronicler are rendered unrecognisable in some textbooks. “No one forbids us to mention that he wrote his ‘Tale of Bygone Years’ in the Kyiv Pechersk Lavra,” explains one editor. “But the line was removed in whole because it just won't pass the review. Now we have some monk named Nestor how wrote a ‘Tale of Bygone Years’, and that's it.”

Textbooks that omit all references to the Kyiv Pechersk Lavra are through the initial editing stage and will be available in schools this fall.

Another new development: the publishing house will release one textbook without its author's surname on the cover because the author is a citizen of Ukraine, and his surname is “obviously” Ukrainian. “You can still find the name in small print on the back, but we removed it from the cover just in case,” says an employee of the publishing house.

Prosveshchenie has not responded to questions sent by Mediazona.

Early in April, the publishing house staff received a letter from their bosses requesting that they remove references to Facebook and Instagram accounts from their work email signatures, and that they also remove mentions of blocked social networks from the textbooks. Mentioning Meta, a company designated in Russia as an extremist organisation in March, was also banned.

Prosveshchenie has long employed machine text review, and in April the program found a mention of Meta in biology textbooks — in the word “metabolism.” “The program only looks for combinations of letters, then its suggestions are reviewed by the editor,” explains one employee.

“You have to admit that it's self-censorship,” says another editorial group member. “Trying to over-censor themselves, many staffers are removing even the most innocuous use cases”.

Ultimately, metabolism was not removed from biology textbooks. Neither were mentions of St. Isaac's Cathedral in St. Petersburg, despite the program highlighting the combination of letters "kiev" in "Isaakievskiy".

Textbooks are supposed to be reviewed for relevance every five years, but since 2014, those reviews have been far more frequent. "You have to understand that history and social studies textbooks are the most censorship-prone books of all: once the pendulum swings, textbooks are immediately amended," says one of the sources.

“Following the annexation of Crimea, passages about the Crimea were inserted everywhere,” says a former employee of a publishing house who requested anonymity.

Sometimes overly vigilant parents file complaints about the content of textbooks, one editor says: “They mostly stick to arts (oh my God, antique statues [are naked]) and Russian language (why do our children have to learn those useless complex words?) textbooks”.

Many complaints are sent directly to the Ministry of Education, and the officials would push them down to the publishing house "without any examination”. The company can’t ignore those complaints, so edits are made.