Informing on your own daughter. Russians turn their neighbours and colleagues to the police over disagreements about the war
Тимофей Пнин
Timofey Pnin
29 April 2022, 14:31 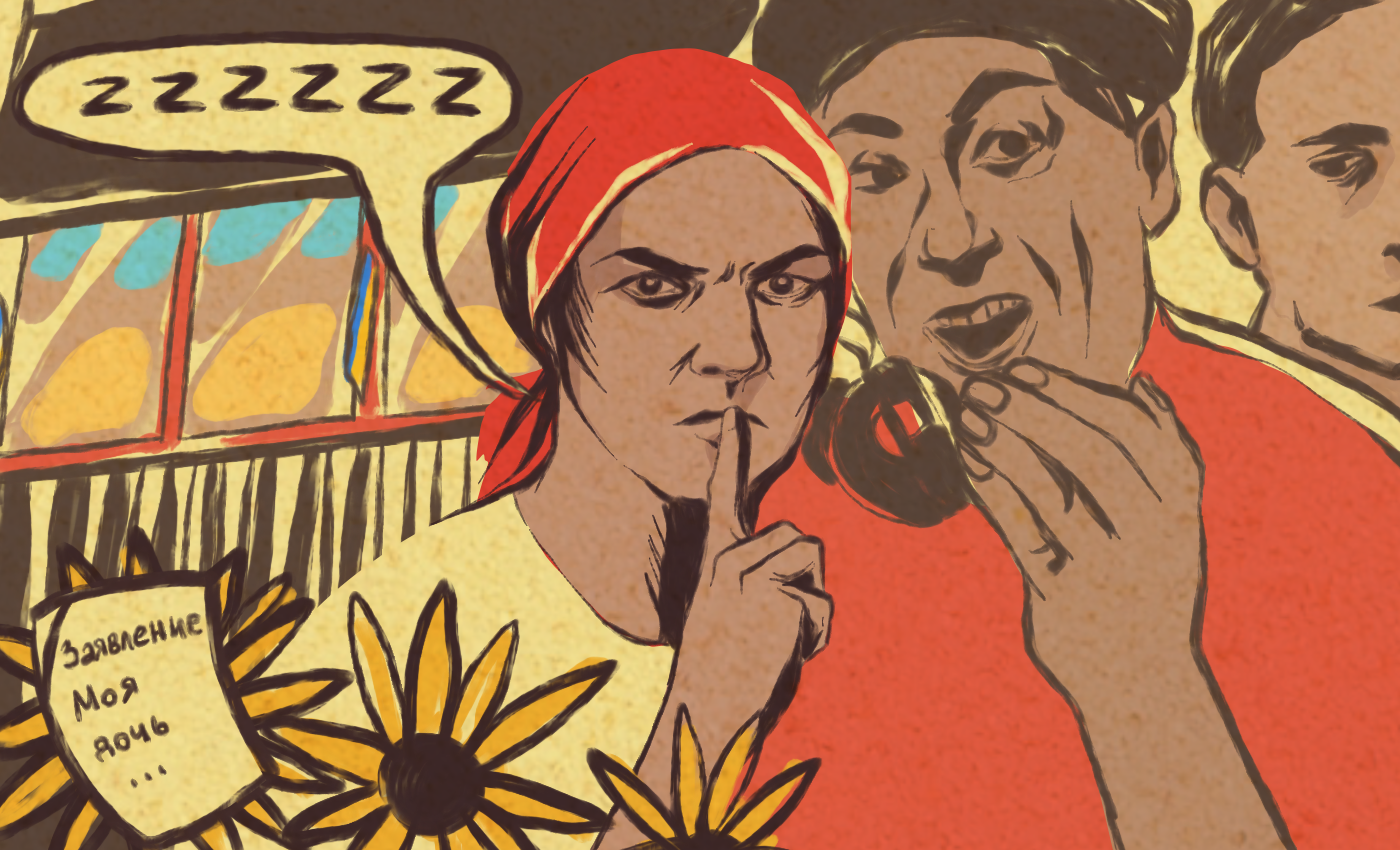 Since the outbreak of war in Ukraine, Russians have increasingly started denouncing each other. People complain to the police about neighbours’ balconies being decorated with yellow and blue ribbons, while the security services personnel turn in their colleagues who tear down the now-notorious Z symbols, and some even give official statements to law enforcement agencies about their own children.

“Have you arrested my daughter?”

“My daughter... has she been arrested?”

“What should we arrest her for? We only know that you saw some messages about something somewhere on the internet…some calls for something?”

“So is... is killing Russians now okay?”

“Well, these calls… we would need to get you questioned officially to find out what you actually saw. That’s to say, are these your daughter’s calls or what?”

This is a telephone conversation between a police officer and Timur Khalitov, a 49-year-old resident of Reutov, a Moscow suburb, that took place on the 10th of April. Khalitov went to the police station that morning and gave a statement about his daughter Elmira, alleging that she “is calling for Russians to be killed”.

The police officer was standing at the door of an apartment in the nearby Moscow district of Novogireyevo: Khalitov's daughter Elmira and her aunt Alla were living there. The man had disclosed the address in his statement, and the police officer was explaining that he had been unable to interview the girl because no one had opened the door.

“We can't just break the door down, it's not the right situation legally,” the policeman continued.

“Go ahead, break it down. Go for it,” Khalitov tried to persuade him slurringly.

The policeman repeated that there was no reason to break the door down and suggested that Khalitov came to the place so that, with his permission, the apartment can be broken into.

“Wait... This is a crucial moment,” said Khalitov.

“What do you mean, a crucial moment?”

“You need to break down that door immediately,” the man insisted.

The policeman again repeated that the door can only be opened if Khalitov had confirmed that he was the owner of the flat or at least registered there.

“Break it down,” assured Khalitov.

“I’ll say it again, no entry without your presence.”

When the police tried to enter the Novogireyevo apartment Elmira was staying with her boyfriend. She was woken up by a phone call from her aunt Alla. Elmira was wanted by the police, she said, her voice trembling. An officer then explained to Elmira over the phone that due to her father's statement she needed to be questioned. She agreed to go to the station.

“[The police officer] immediately acknowledged that her father was drunk, very drunk, but he said that he would require a statement from her anyway,” Elmira recalls.

Elmira Khamitova is a 21-year-old student at the Higher School of Economics. She runs “Podpolye” (“Underground”) Telegram channel and streams on Twitch, where she discusses politics and public life in Russia. Elmira says that while she opposes state policies she has never published anything in favour of "killing Russians”.

She has not been in touch with her father, a former lawyer, for a long time. According to her, living with him was always difficult and even unsafe because of his temper. Then he started hitting the bottle, and conversations got completely unbearable.

Elmira first suggested that her father's denunciation of her to the police was an overreaction to some of her posts on Vkontakte about the war in Ukraine and its potential consequences for Russia. Her father's explanation is quite a bit more absurd.

“I got a call from people in Thailand, from fuck knows where... and they reported that there were supposedly these messages [his daughter's calls to kill Russians]. I felt compelled to believe it. I don’t know how it happened,” Timur Khalitov explained when asked by Mediazona.

It is impossible to verify whether such a call actually took place. Timur Khalitov claims that he has many enemies and that he could have been “set up”. According to the man, he wrote a complaint about his daughter not only to the police but also to the FSB.

At the police station, Elmira's phone was taken away and the officers searched through it for about fifteen minutes. Before arriving at the station, Elvira had cleared her message history and deleted Telegram. However, the police were more inclined to check her Instagram account and they were surprised when they were unable to use the app. The officers were probably unaware that Meta had just been blocked in Russia following its designation as an “extremist organization”–plus Elmira had disabled her VPN.

Elmira said that her story, with its non-existent calls to "kill Russians", caught the eye of some “big police chief”. He questioned her at length about how such an accusation could have happened in the first place.

“I told them, the man is dysfunctional. My father is an alcoholic and has been drinking for years. He doesn't work, he just drinks all day long, and he has those constant delusions. He calls and says he's under siege, or that he's catching Nazis. My father just fabricates stuff,” she says, recounting her conversation with the police. She adds that when she was 15, her father wanted to poke her eyes out because they had “some kind of witchcraft” in them.

The police eventually released Elmira while also promising to charge her father with disorderly conduct, for swearing when he came to the police station to make a statement.

Elmira called her father from the police station and he began repeating the story of the call from Thailand. “I said to him, OK, let's say it's true. But why on earth did you go to another city, that is, from Reutov to Moscow, to write a statement about me, saying that I am calling for the killing of Russians? He told me: Well, I don’t know what to expect from you, I decided to play it safe.”

A culture of telling on your neighbour

Since the outbreak of war in Ukraine, Russians are indeed denouncing more people who do not share the state's point of view on the reasons and motives for the invasion of its neighbour.

The biggest story took place in Penza, where eighth-graders denounced their English teacher, Irina Ghen. During the lesson, the teacher was explaining to one of her pupils why she could not go to a competition in Czechia.

The teacher said, “Until Russia starts behaving in a civilised manner, this will go on forever. They wanted to reach Kyiv, to overthrow the government. It is in fact a sovereign country with a sovereign government. We have a totalitarian regime. Any dissent is considered a thought crime. We're all going away for 15 years. And I, too, will be gone for 15 years.”

Irina Ghen was eventually charged with spreading "fake news" about the Russian army after her pupils passed an audio recording of the lesson to the police. Still, she believes she did the right thing and has no regrets about it.

“I think it comes from the parents. I mean, one of the children may have mentioned in some conversation that their English teacher had a completely different point of view on this matter. I can tell you that one of the pupils in this class has a parent in the FSB,” the teacher told Idel.Realii website. “I think that the idea to record me was coming from him, that they should record me at some point and then this recording should be 'leaked' to law enforcement agencies. It is my version, but I'm 100% sure of it.”

Since March, Russian teachers are supposed to condemn calls for anti-war protests and convey talking points from President Vladimir Putin's speech about the “special military operation” against Ukraine to the children. Teachers who disagree risk dismissal.

For example, in Astrakhan, a maths teacher Elena Baibekova lost her job because one of her students complained about “political conversations” during her lessons.

The rhetoric about Russia's enemies has become more aggressive in the context of the war. In mid-March, President Vladimir Putin even spoke of the existence of “national traitors”, saying, “Yes, undoubtedly, [the West] counts on the so-called fifth column, on national traitors, on those who make money here, among us, but live out there. Not geographically, but in their thoughts, according to their slavish consciousness.”

Mediazona reported how, following the invasion of Ukraine, there's been a wave of new websites and Telegram channels claiming to expose disinformation about the “special operation” have emerged. Sometimes they encourage readers to reveal identities of those who post “unreliable” information with a possibility to hand it over to the security services.

All this obviously contributes to the growing number of reports about people filing complaints about their neighbours’ yellow and blue ribbons at their balconies. Shoppers at Perekryostok stores call the police when they see anti-war stickers or colleagues tearing down Z symbols. In Belgorod, vigilant citizens even managed to apprehend a young man who sprayed anti-war graffiti on a bus stop.

Elmira Khalitova, whose father denounced her, said he had always held loyalist views and probably “watched too much TV” over the course of this war. Khalitov admits that he “might have” behaved “inappropriately” but adds that if his daughter had actually called for the “killing of Russians,” he would have done exactly the same, as it was his “civic duty.”

“The way I look at it, as I imagine it, I think I was doing the right thing. Anyway, that was a sensible thing to do. Maybe from the point of view of the [relationship] to my daughter, it was maybe unacceptable. Not maybe, sure. But if it was against the law, then I definitely would [go to the police]. No doubt about it.”