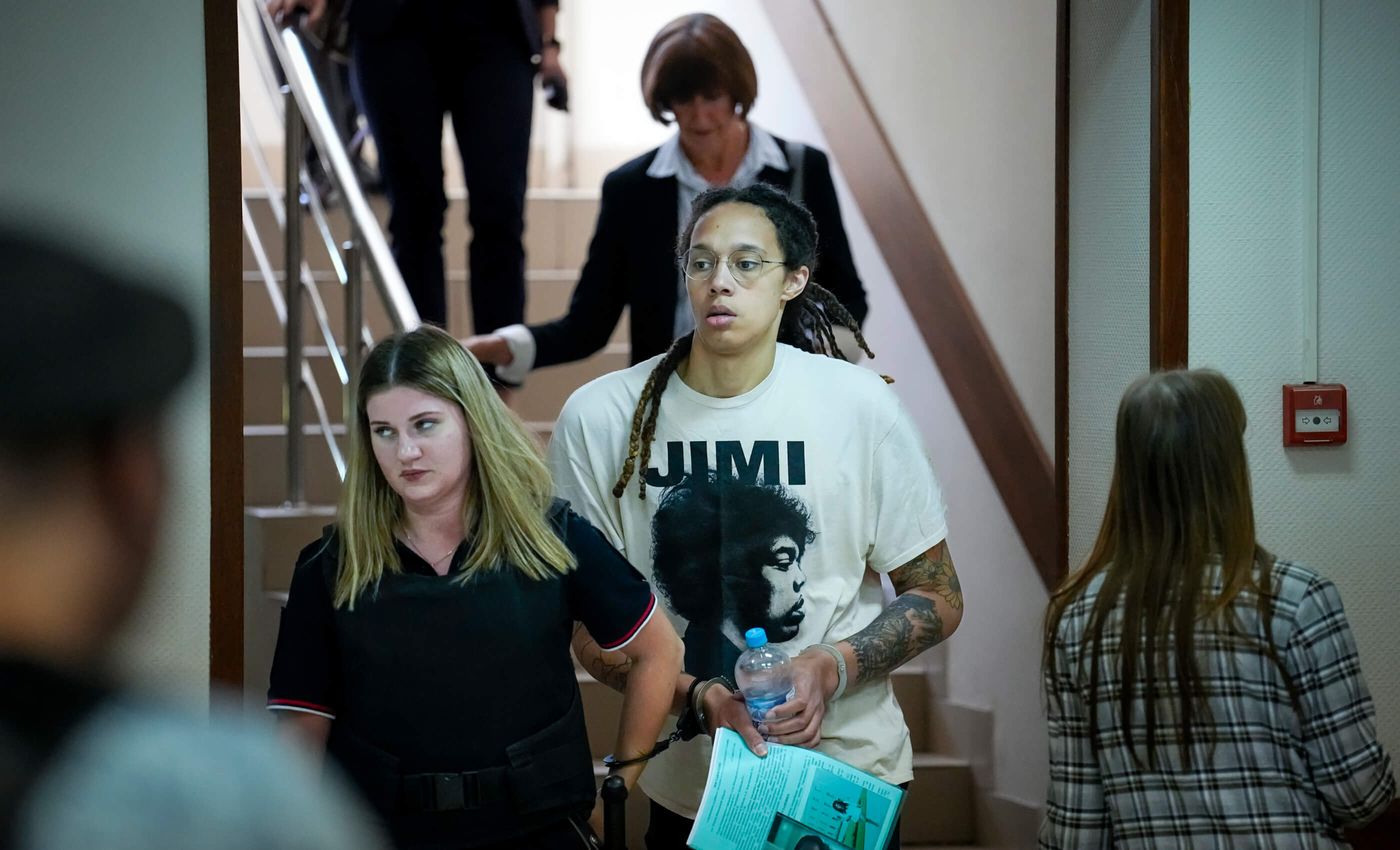 The trial for WNBA star Brittney Griner began in Khimki City Court near Moscow. The two-time Olympic gold medalist who is now in pre-trial detention appeared in court about four and a half months after she was arrested at a local airport on drug charges. The customs officer who searched Griner at the airport testified at the hearing, but Griner didn't. She and her lawyers are yet to comment on the case: it is still unclear if she pleads guilty or not.

"Is there anyone who is not a journalist?"

A Khimki City Court bailiff is trying to figure out what is going on. Over 30 accredited reporters from Russian and foreign media outlets, agencies, and TV stations gathered in the hallway on the morning of July 1 in front of the metal detectors. Ordinary court visitors have no idea what to do. It is the second hour now that journalists have been waiting for the start of the trial of basketball player Brittney Griner.

Griner was detained at Sheremetyevo Airport on February 17, where she arrived from New York allegedly carrying vape cartridges containing 0.702 grams of hashish oil in her hand luggage, a "significant amount" under the Russian Criminal Code. The athlete was charged with drug possession and smuggling and sent to a pre-trial detention facility near Moscow. She faces up to ten years in prison.

The court in Khimki regularly hears cases of foreigners detained at the Sheremetyevo Airport with drugs. On June 16 former U.S. Embassy employee Marc Fogel was sentenced to 14 years in a strict regime prison colony for carrying 11 grams of marijuana and 8 grams of hashish oil. He insisted that those substances were prescribed by an American doctor after an operation. Fogel pleaded guilty, but still spent almost a year in pre-trial detention. Griner didn't have to wait that long for her trial.

The most high-profile trial of this kind was in 2019 when Naama Issahar of Israel was sentenced to 7.5 years in a general-security colony for carrying 9.6 grams of hashish. Three months later Russian President Vladimir Putin pardoned her "on humanitarian grounds". However, her release was attributed to Israel's decision to give the Russian government control of the prominent Alexander's Courtyard in Jerusalem.

Griner's case has been discussed in the context of a possible exchange ever since her arrest. In early May, the U.S. State Department declared her "wrongfully detained" - the status allows the United States to negotiate for Griner's release before the court's decision. Moscow rejects any political motives behind her arrest.

Brittney Griner is considered one of the best female basketball players of our time. At 6-foot-9 and with a wingspan of more than 7 feet (wider than many male players), Griner has always been among the tallest in WNBA, playing the center position. She is a two-time Olympic and world champion with the U.S. national team and WNBA champion with the Phoenix Mercury team.

This spring Griner missed her seventh consecutive title with the Russian UMMC team she's been playing with in the off-season: after her arrest, the team lost in the Russian championship finals for the first time in 14 years. Past merits quickly forgotten, the team didn't offer any public support: they did publish a statement in March saying that "what happened to Brittney" was "totally unexpected and extremely unpleasant" but didn't mention Griner on social media, and team representatives were nowhere to be seen today in Khimki.

Griner did get support in the U.S.: basketball players and the WNBA spoke up for her, Boston Celtics players made statements during the Finals series against the Warriors in June, and the most successful basketball player of our time, LeBron James, spoke publicly about the case.

The arrest came just before the start of the war in Ukraine and amid the rift in US-Russian relations. The mutual expulsion of diplomats even resulted in a communications fiasco when Griner attempted to call her wife from the detention facility via the embassy, and there was no one at the desk to pick up the phone and connect them.

Nothing is more important than state secrets

The representatives of the U.S. Embassy in Moscow, led by chargé d'affaires Elizabeth Rood, were the only ones allowed to attend the hearing. They entered the building in silence and followed Griner when she was being escorted to the courtroom.

Shortly after the hearing had started, the Khimki City Court press secretary Polina Vdovtsova told the reporters that all sides in the trial had requested that the media remained outside. The courtroom was very small, she argued, and with the embassy delegation present, there was no room left. Only one Russian journalist and one foreign reporter were allowed inside in order to pass recordings later.

Inside, Prosecutor Nikolay Vlasenko presented his opening statement, and judge Anna Sotnikova asked Griner whether she was ready to plead.

"At this moment no, your honor. At a later date," replied Griner in English.

During a break, her lawyer Alexander Boykov instructed the interpreter: "First of all, she says "Your honour" as a term of respect, and you miss that detail. But that's not what's important. Please, no more comments to the press," his voice can be heard in the recording. "No problem," the interpreter responds. "Since after the previous hearing, no one but you told anyone anything". "Understood."

Then the first witness, senior customs inspector Liliya Belobrova, gave her testimony. "I stopped one Brittney Griner, conducted an examination procedure, and inspected her personal belongings. During the examination of personal belongings liquids or some... heaters were found in her hand luggage. Together with the fellow officers, we concluded that they might contain prohibited substances."

When pressed by Boykov, she clarified that the vape cartridges were discovered when Griner put her bag in the scanner, and only then she was asked to come along for a more detailed examination.

The second witness for the prosecution was an operative Nimchenko, but he testified behind closed doors due to his clearance. Judge Sotnikova asked the defence lawyers if they had any objections, and Boykov replied: "Nothing is more important than state secrets! At your discretion."

The court then adjourned until July 7, as the other witnesses failed to attend.

Griner's lawyers confirmed that she is not yet saying how she will plead and made no comments about the charges.

After the hearing, the U.S. embassy's chargé d'affaires Elizabeth Rood said that the U.S. government was very concerned about the case: "I did have the opportunity to speak with Ms. Griner in the courtroom. She is doing as well as could be expected in these difficult circumstances and she asked me to convey that she is in good spirits." According to Rood, Russia's "unacceptable" actions endanger the safety of all foreigners.

Correction at 17:40, July 6. Previous version of this article wrongfully claimed that UMMC didn't comment on Griner's arrest; they did.