“Do you still need this war?” Moscow city councillor jailed for 7 years over criticism of war against Ukraine
Сергей Голубев
Sergey Golubev
8 July 2022, 19:56 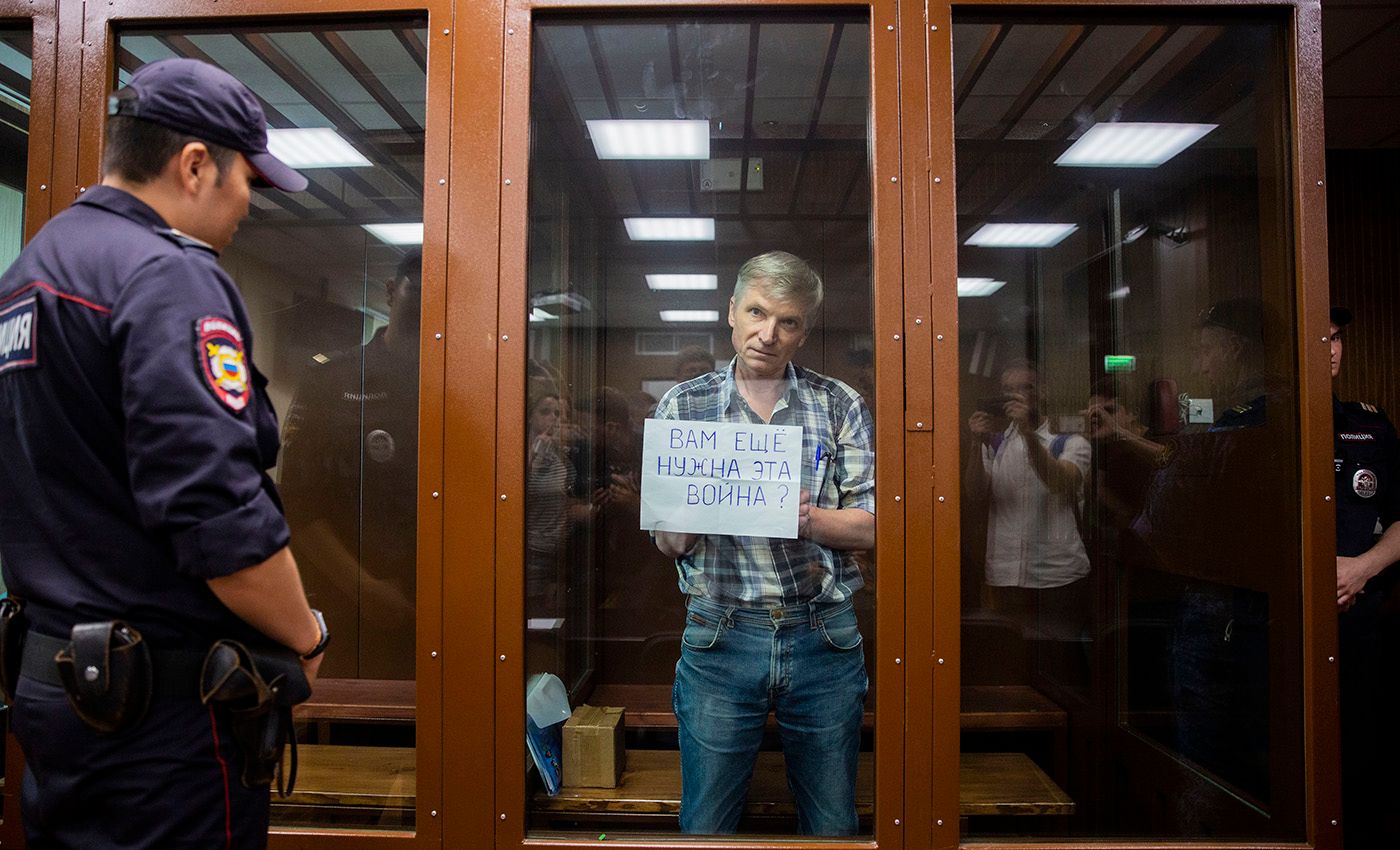 Alexei Gorinov, a 60-year-old Moscow city councillor, became the first Russian to be sentenced to seven years in prison for "discrediting" Russian military's attack against Ukraine. Gorinov committed the offense of "knowingly spreading false information" about the military when he opposed conducting a children's drawing contest while children were dying in Ukraine. Moscow Judge Olesya Mendeleyeva sentenced Gorinov to seven years in prison for this statement.

It's been an hour since Alexei Gorinov was supposed to be sentenced, but the hallway of Meshchansky District Court in Moscow is getting crowded. No one knows when the court session will begin; lawyer Katerina Tertukhina repeats that her client has not been transported to court yet. But the crowd — Gorinov's family, human rights activists, Moscow City Duma deputies, activists, and supporters — is enthusiastic after Judge Olesya Mendeleyeva promised she would deliver the verdict in a large courtroom, for the first time since the trial had commenced.

Half an hour later bailiffs let people enter the courtroom. Gorinov greets journalists and supporters with a makeshift anti-war sign that reads "Do you still need this war?"; these signs have become a tradition during his short trial. Before the closing arguments, Gorinov was forced back to the escort room so that the bailiffs could confiscate his sign. Now one of the bailiffs rushes to the courtroom enclosure, nicknamed "aquarium" for its tempered glass walls, and tries to cover the sign with his body and raised hands, but Gorinov starts walking from side to side, and the bailiff gets bored quickly and backs away. “Apparently, the verdict will be announced to a handcuffed defendant. It is an outrage,” Gorinov complains.

Well over 70 people turned up for the verdict announcement. It takes almost ten minutes to let everyone into the room. The human rights activist Marina Litvinovich and Moscow City Duma deputy Mikhail Timonov take turns telling the crowds to "squeeze together tightly" so that there would be enough room for everyone. It's the first time that so many people were allowed inside, yet Gorinov is not happy: "It's just not enough".

When everyone is seated, the head of the bailiffs, acting like a school teacher in front of students, informs them that filming, talking, and shouting are prohibited in the courtroom; failure to comply would result in an administrative offence report.

"Any questions?" he asks. "What's the fine?" a woman's question is met with a round of laughter.

Others tell her that the fine is 500 roubles. Judge Olesya Mendeleyeva enters the courtroom and starts pronouncing the verdict.

At a district council meeting on March 15, Gorinov proposed that a moment of silence be observed "for the victims of the ongoing military aggression in Ukraine" instead of the usual planning.

"Tell me, please, how can we talk about a Children's Day drawing contest? About Victory Day dancing performances?" Gorinov asked his colleagues. "Now children are dying every day. For your information, about a hundred children died in Ukraine. Children become orphans, grandchildren and great-grandchildren of World War II veterans are now in the midst of these hostilities in Ukraine. I believe that all the efforts of civil society should be aimed only at stopping the war and making sure that Russian troops withdraw from the territory of Ukraine. If our agenda included those ideas, I'd happily discussed and voted. But as it is, I am unable to, and the rest is up to you."

In April, both were charged with disseminating "fake news", an aggravated charge since they were "acting as a group" and "abusing their power" while being "motivated by hatred." Kotyonochkina left Russia and was arrested in absentia, Gorinov was arrested and sent to the Matrosskaya Tishina pre-trial detention facility.

It took the Investigative Committee five days to conclude that the councillors understood that their statements would "cause anxiety, fear, confusion, and insecurity". One of the pieces of evidence in the case was an almost two-hour recording of the district council meeting on YouTube; it has now been watched over 46,000 times.

The most important part of the trial — the interrogation of witnesses for the prosecution — was closed to the public and the media. However, the prosecutor's arguments as well as the verdict did reference those statements. One of the witnesses had a last name Shuranova — this matches the last name of deputy head of the local administration. She lamented that she was at that very meeting and was very upset that the children were being deprived of the event.

The second witness was a young man, last name Lesota. "In mid-March, the exact time he could not remember", Lesota watched a video recording of the meeting, and it "offended him, hurt him, and he felt like he was treated unfairly since both his grandfathers fought against fascism," Judge Mendeleyeva referenced his testimony in the verdict. "He considers the statements by Kotyonochkina and Gorinov unacceptable, aimed at discrediting the use of the Russian Armed Forces to protect the interests of the state. Gorinov's statement also undermined domestic tranquillity," she recounted.

Questions for the defendant touched upon geopolitical issues. "Do you know the aims and objectives of this special operation?" Judge Mendeleeva asked. "What has been officially announced, yes. But I can't even pronounce these words," Gorinov quipped, probably referring to "denazification" and "demilitarisation" of Ukraine.

Chairman of Agora human rights group Pavel Chikov notes that this is the first "fake news" criminal case with a prison sentence: previously, one defendant was fined 1 million rubles, another received a suspended sentence. Eight other cases are currently being tried in courts, a total of 68 criminal cases are being investigated in Russia.

Judge Mendeleeva's reasoned that "reformation of the defendant is impossible" without imprisonment in a general regime penal colony. These words made Gorinov's wife and lawyer Tertukhina cry. At this point Judge Medneleeva announced a five-minute break, and all the listeners stood up and applauded Gorinov.

Gorinov started explaining that the decision had been written in advance. "She wasn't even listening yesterday, she was messaging online, I was observing carefully. She was on her phone, chatting with someone. It's impossible [to write the verdict] in one night," he insisted. The wife asked Gorinov not to respond to every one of her letters: she would write to him often and he need not waste his time.

Then Judge Olesya Mendeleyeva returned and delivered the final part of the verdict: 7 years imprisonment in a general regime penal colony with a 4 years ban on public service.

"Gorinov, do you understand the sentence?" she asked. "Yes, but I'm surprised it's so soft," he replied.

Correction, July 25, 17:55. This article originally misquoted Gorinov as saying that the sentence is "so harsh." Later he brought our attention to the mistake with the letter from a detention facility, emphasasing that he said "so soft."