“We are most interested in murderers and bandits. You’ll like it in our squad.” Evgeny Prigozhin of the Wagner Group seems to be personally enlisting inmates to fight in Ukraine
Анна Павлова|Елизавета Нестерова
Anna Pavlova, Elizaveta Nesterova
10 August 2022, 15:39 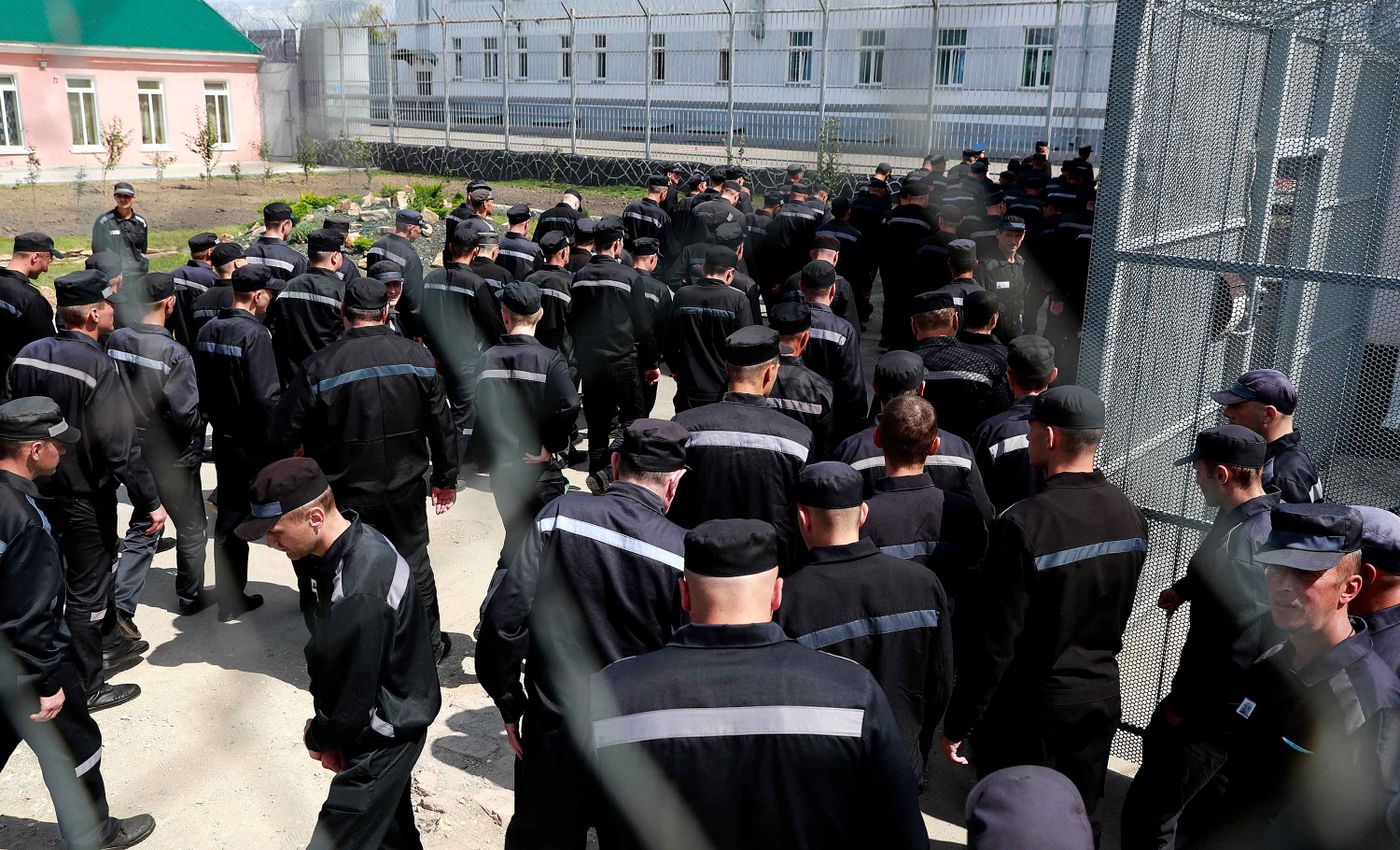 Mediazona was contacted by convicts from prisons in Central Russia—in Yaroslavl and Tula regions—who described an unexpected visitor. A bald, middle-aged man, with a ‘Hero of the Russian Federation’ medal on his chest came to offer the money and freedom to those willing to fight in the war against Ukraine. Both convicts name Yevgeny Prigozhin, the notorious Russian businessman close to the Kremlin linked to the Wagner Group.

The initial reports of PMC Wagner recruiting prisoners to fight alongside regular Russian troops in Ukraine came from the Leningrad region in July and were published by Gulagu.net, an organisation dedicated to uncovering human rights abuses in prisons. iStories, an investigative outlet, has confirmed these reports. Over the next couple of weeks, reports of inmate recruitment in other parts of Russia came to light.

By late July, Yevgeny Prigozhin, a businessman from Putin’s inner circle, took it on himself to tour penal colonies and meet convicts. According to Vladimir Osechkin of Gulagu.net, Prigozhin, who is also believed to be the founder or ‘patron’ of the Wagner Group private military company, started his recruitment campaign in prisons specially designated for former law enforcement, and continued on to high security facilities.

Following these reports, Verstka sent an inquiry to Prigozhin’s umbrella company, ‘Concord,’ and he replied in his usual brash style: “Can’t hide anything from you, huh? I can definitely say that I have been in and out of prisons in the 1980s. Can’t remember every single one—it was over 40 years ago. Definitely been to Leningrad colonies, facilities in the Komi Republic, and at the Vyatlag. Many people did time in Russia, some disappeared without a trace, while others came to their senses and are now working for the good of their country.” Verstka reports that recruitment groups have visited at least 17 facilities in 10 different regions of Russia.

Mediazona publishes the statements of two convicts, unacquainted with each other, one of whom is serving his sentence in Yaroslavl region, and the other — in Tula region.

“Prigozhin came with the ‘Russia Star’ attached to his chest. Said that he represented PMC Wagner, a legalised crime syndicate, and on its behalf offered us to fight in the war,” writes a convict from the high security penal colony #2 in Rybinsk, Yaroslavl region. Not only Mediazona received his messages: some of them were published by “Zhitel MLS” Telegram channel, one of his messages was read out during a Bild video stream by Olga Romanova, a prominent human rights activist. The described meeting took place on August 1st.

“We were all gathered on prison grounds, like the whole colony, including the disabled and pretty much everyone who was not supposed to be there — the solitaries, the quarantined, the elderly, the sick. Everyone who was able to walk. Even those required to perform labor were summoned. Only those punished for unacceptable behavior weren’t there,” our source recounts.

The PMC representative was not alone. A white van entered the premises and brought eight men in uniform; four of them stayed behind with bags and backpacks, and the other four approached the prisoners.

“Three buff men with holstered guns (how could they allow these at a colony?). The fourth guy was middle-aged, bald, average height, and a ‘Hero of the Russian Federation’ medal was on his chest,” goes his description of the recruiter that he identified as Yevgeny Prigozhin.

“When some of us asked who he was, he told us to Google him later. I am 1000% certain it was Prigozhin,” our source insists.

According to his calculations, just short of 15 hundred men were gathered, all the convicts ‘who were able to walk’ and the entire prison staff. They were told that “the World War III has already begun,” and now they had the opportunity to fight on Russia’s side.

“We are not the Armed Forces, more like a proper crime syndicate embedded with the military. My boys used to move into some African country leaving no survivors in a couple of days. And they are doing the same in the Ukraine as we speak. oin the PMC and sign a deal with the devil. Follow me out, and you either come back a free man, or die. You will follow orders and you will kill our enemies. If you try to run, you will be executed on the spot,” the inmate recites the speech.

Those who agreed to sign the contract were promised a monthly salary of 100 thousand rubles “plus a bonus of around the same amount,” and in the case of an honorable death, their families are to be paid 5 million rubles.

“This will be an official contract and it will be held by an appropriate branch,” Mediazona source recounts. “He said that we would not become mere cannon fodder. He estimated the chance of death at 15%, and the chance of injury at 25%. Desertion, marauding, and drug use will be punished by execution,” our source adds.

The recruiter claimed that “the experimental group of convicts was deployed on July 12th.” He was referencing the 42 inmates from a facility outside of St. Petersburg, of whom, allegedly, only five have been killed: “He said that they fought like lions, attacked an enemy strongpoint with melee weapons and massacred everyone there.”

“They were most interested in murderers and bandits, and wary of drug addicts and rapists. He said that they were looking for professional killers, not domestic murderes — said, ‘you would fit right in at our unit’. Basically, he made the impression of a maniac. Signing up was not mandatory, however. He said that we should [realise] that we need this. Many decided to sign up, quite a lot of us actually, no less than 200 people,” says the inmate. According to him, for the most part it was “first-timers with long sentences,” who agreed to join the PMC, but “a lot were ideological in their decision to join.”

Those who agreed to fight in Ukraine were to pass a scrutinizing screening: an interview, physical examinations, then a document inspection and a polygraph test, which was to determine the inmate’s inclination to desert, to using drugs, and if he was capable of murder. If the convict passes the polygraph, in two weeks he was to participate in military exercises.

“From the airfield near the colony, we would be flown out to a secluded place right by the border, and you would be allowed to change into camo. Over the course of the next few weeks, you would participate in military training. From that moment on, you are no longer convicts, you are my fighters. You will train for 20 hours daily and suffer the same deprivations as do my regular fighters; you will share the same trenches. Upon completion of your training, you will be transferred over the border on a chopper, where you will become true soldiers of fortune, and only then the countdown to 6 months towards your acquittal will start,” our source recites the recruiter.

Immediately after ‘the Wagners’ left, the convicts were deprived of access to the prison telecommunication service, Zonatelecom, so only the forbidden ways of communicating with the outside world remained. Our source secretly owns a cellphone; he believes that the recruitment of convicts is ‘criminal’ in nature.

An inmate from penal colony #4 in Plavsk, Tula region, claims that Yevgeny Prigozhin visited their facility as early as July 25th. According to him, that day the recruiters flew over multiple prisons in a helicopter. “I knew who he was, and he even said, that tomorrow half of the country will know of this visit,” the inmate wrote.

In general, the details of his story matched with that of the inmate in Rybinsk. “[Prigozhin] warned that the mortality rate is 15%. He said: ‘We go first, you follow us, we do not need cannon fodder, we are looking for foot soldiers.’ One of the cons said that he served in the Chechnya wars and had military training. Prigozhin declined his candidacy, saying that they were not looking for specialists, that hey had their own, they only needed people for the infantry units,” the inmate recounts.

According to him, Prigozhin kept saying: “I am here on special orders from the president, so I don’t give a fuck about anyone else, I just need to win this damn war at all costs.” To the incarcerated in both colonies, the recruiter admitted that he also ‘did time in the North.’

As compensation for fighting in the war, he offered not only money, but acquittal and a clean record; and to non-citizens, a Russian passport. “I served 10 years myself, so I [understand what it’s like and] think you are going to like my offer,” said the peculiar visitor, and added that this war was far from over, and those who think otherwise “live in La La Land.”

“There are no prerequisites aside from age — you must be under 50. The ‘degraded’ are also out of the question. Everyone else is welcome,” the Plavsk colony interlocutor recounts.

“By the way, the remaining sentence of those who agreed to fight is quite varied, — he tells Mediazona. — Some would have done another 10-20 years, but a lot only had a year or two left. I even knew a guy who was due to be released in October. I asked him: ’What do you need it for? The acquittal?’ Turns out he was afraid that a criminal record was akin to ostracism. That he wouldn’t be accepted back into society with a record.”

According to the inmate from colony #4, those who signed up were told that they would become ‘stormtroopers.’ A total of about 100–150 men enlisted.

Many convicts truly believed what the recruiters told us, says the interlocutor. “For the most part, people in here trust government media, believe that they will get lucky, and, well, really want to go home, while not seeing the risks they were about to take. The money barely interested anyone. But their belief that this was not a ruse is all due to Prigozhin’s rhetorical abilities, not because his speech made any sense,” the convict explains.

He believes that ‘very few will return’ from Ukraine: “I am not fighting no war, even if they extend my sentence, I’m still not going.”

Just like in Rybinsk, after the PMC Wagner visit, the incarcerated in Plavsk were deprived of their legal means of communicating the outside world. Mediazona found out about this from a different convict’s friend, who forwarded us their message chain. It read that the management of the colony said the payphones will continue to be out of service until enough volunteers enlist in the Wagner Group. At the time of this article’s publication, Zonatelecom has resumed service at penal colony #4.

The friend of the convict is concerned that the latter might end up in Ukraine, when they ‘enlist the next round’ of inmates. According to the prisoner, the recruiters were set to return in a few months, if the first wave of recruitments ‘runs out.’

“I don’t know where he got it from, I am shocked at these claims. He has some weird certainty, I guess, and a complete disappointment in the judicial system, I don’t know. You know, he was falsely accused with a very demonstrative indictment,” — our source claims and adds that he even lectured his friend ‘on the significance of consequences.’