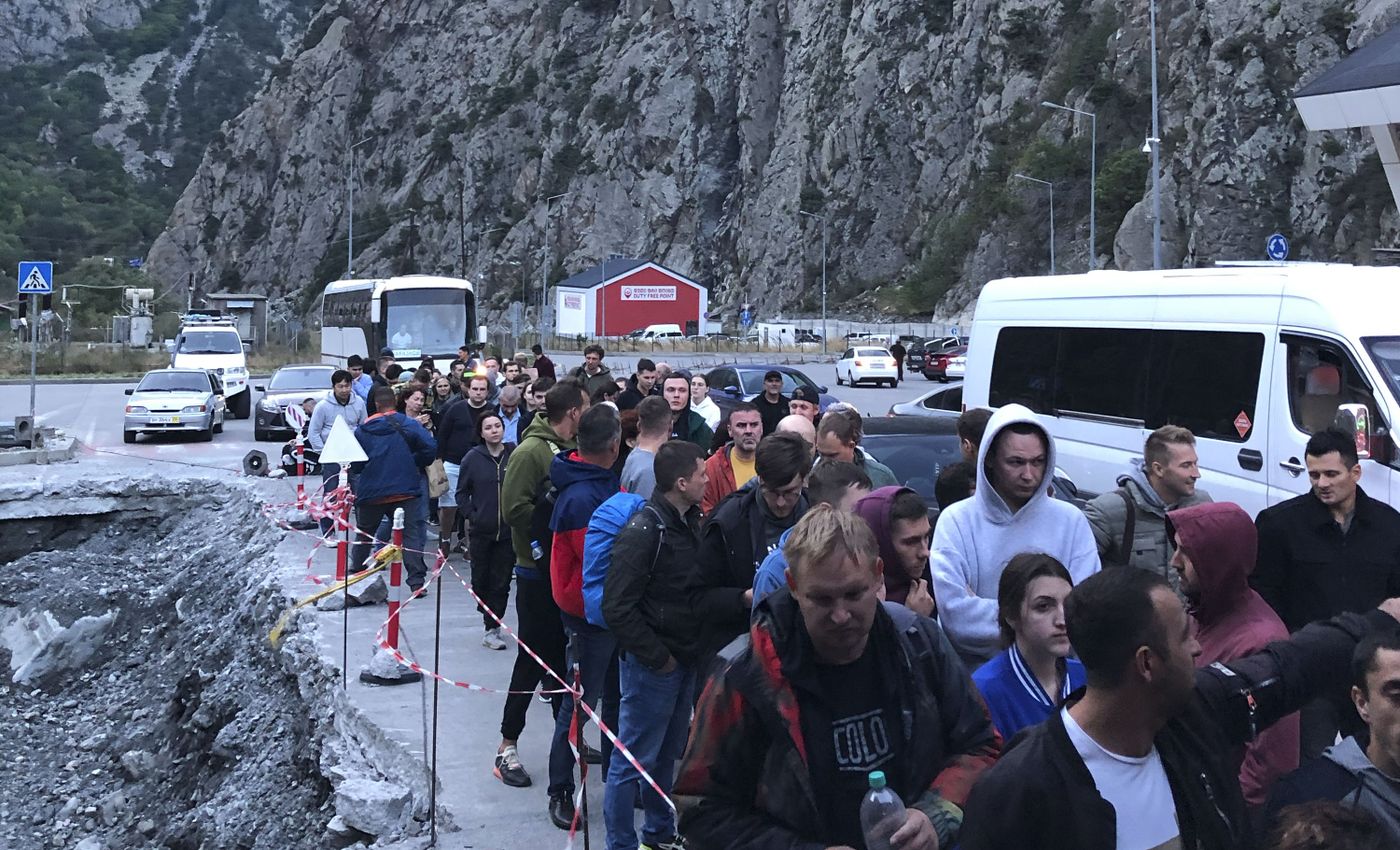 A queue at the Verkhny Lars border checkpoint. Photo: Mediazona

Following Vladimir Putin’s announcement of a ‘partial mobilisation’, Russians scrambled to flee, and international airline tickets quickly sold out, so people gathered in long queues at land borders. Here’s a story of a man from Astrakhan, in southern Russia, who hopped on a bus to Tbilisi yesterday, arrived at Verkhny Lars checkpoint—the sole border crossing between Russia and Georgia—at four in the morning, and was able to cross into Georgia at eight in the evening.

As we were travelling from Astrakhan in a minibus, at every checkpoint I would see, for example in Makhachkala, 999 999 taxis carrying people with Aeroflot tags on their suitcases. In other words, they came to Astrakhan airport, hailed taxis, and headed straight to the border.

When we arrived at the border at four in the morning, the queue was already a kilometre long. Come morning or afternoon, the queue would extend to about seven kilometres according to Yandex.Navigator app that shows traffic jams in red. Between four in the morning and three in the afternoon, we’ve been able to move about 800 metres. The traffic was very slow, but we also had to deal with the constant stream of cars trying to jump the queue. The police were trying to control it, but very selectively. I’ve seen many cars with license plates ending in 15—that’s North Ossetia—bringing people to the border. They bring people with their stuff, dump them and drive back; there was one very old beat-up Mercedes, driving back and forth all the time.

Later, just because it was so long, tedious, and stressful, I got off the bus and decided to ask for a place in someone's car. I went all the way to the border and walked back, approaching every car and pointing my finger: like, do you have a seat? Everyone waved me off. Then I stumbled upon some Priora with two Dagestanis in it, and they were all cryptic, like, “Dude, we seem to have someone, but sort of not, so why don’t you hang out here, and we'll tell you later.” I was like, “All right, here's my phone number, call me.”

I went for a walk and stood in the corner, and there was this guy right nearby. I ask him if he’s found a car or not. And he looks right through me, all flat-eyed, and says, “I don’t even know what I’m doing here.” I was like, OK, and went back to that Priora. I got lucky.

In the meantime, the Dagestanis had found two more guys from Crimea who looked fucking terrified; they were scared shitless, literally shaking at every noise. They looked like businessmen, talking about ‘saving the team’ and stuff like that. Then there was a guy from Moscow, also trembling. Quite a team, and we paid 10 grand each to cross the border.

And when we were approaching the checkpoint, some woman rushed to us in tears, started knocking on windows and shouting that she was ripped off and that she needed to cross the border urgently. “For the love of God, take me with you”. I was shocked, it was like a movie with great actors, fire!

Next, we passed the Russian border. There, one border guard was cracking some stupid jokes. He asks a guy in front of us, “Do you have a military I.D.?” “No.” “Why not?” “I didn't serve.” “Why didn’t you serve?” “I’ve got a condition.” And he’s like, “Here you go, I just cured you. Congratulations, you’re healthy now.” Crimean guys go pale and try fuck off to another line. I’m standing there thinking, “Shit.” And then he just hands this guy over his passport and says: “Here you are. Please, move on.” It was a fucking joke, that’s a joke to them.

Later, when another [border guard] was checking my papers, there were no jokes. He just asked about the purpose of the trip, the destination, and if I had a military I.D.—I said I did not, fit for limited military service. “Okay.”

I went on towards the border crossing, and there were a bunch of people in the neutral zone with bicycles and scooters—the kind Moscow hipsters use. They loaded their huge trunks with belongings on top of these, all were in a state of panic. One man’s bicycle broke down and he threw it away. The Dagestani driver said a rumor was going around that the border was going to be closed at midnight.

But in the end, they let everyone through. The Crimeans too, they are going to fly to Argentina now. I also met a taxi driver, he was driving two very rich Chechens, who decided to cut their beards off just before the border. At the Georgian border, all Dagestani and Chechens are taken to room 212 or 112. The driver crossed the border while they were taken to this room and held there for an hour and a half. But they have been released eventually: they plan to go straight to the airport and fly to Dubai.