“This is not our war.” Protests against mobilisation erupt in Dagestan in the Russian North Caucasus
27 September 2022, 12:46 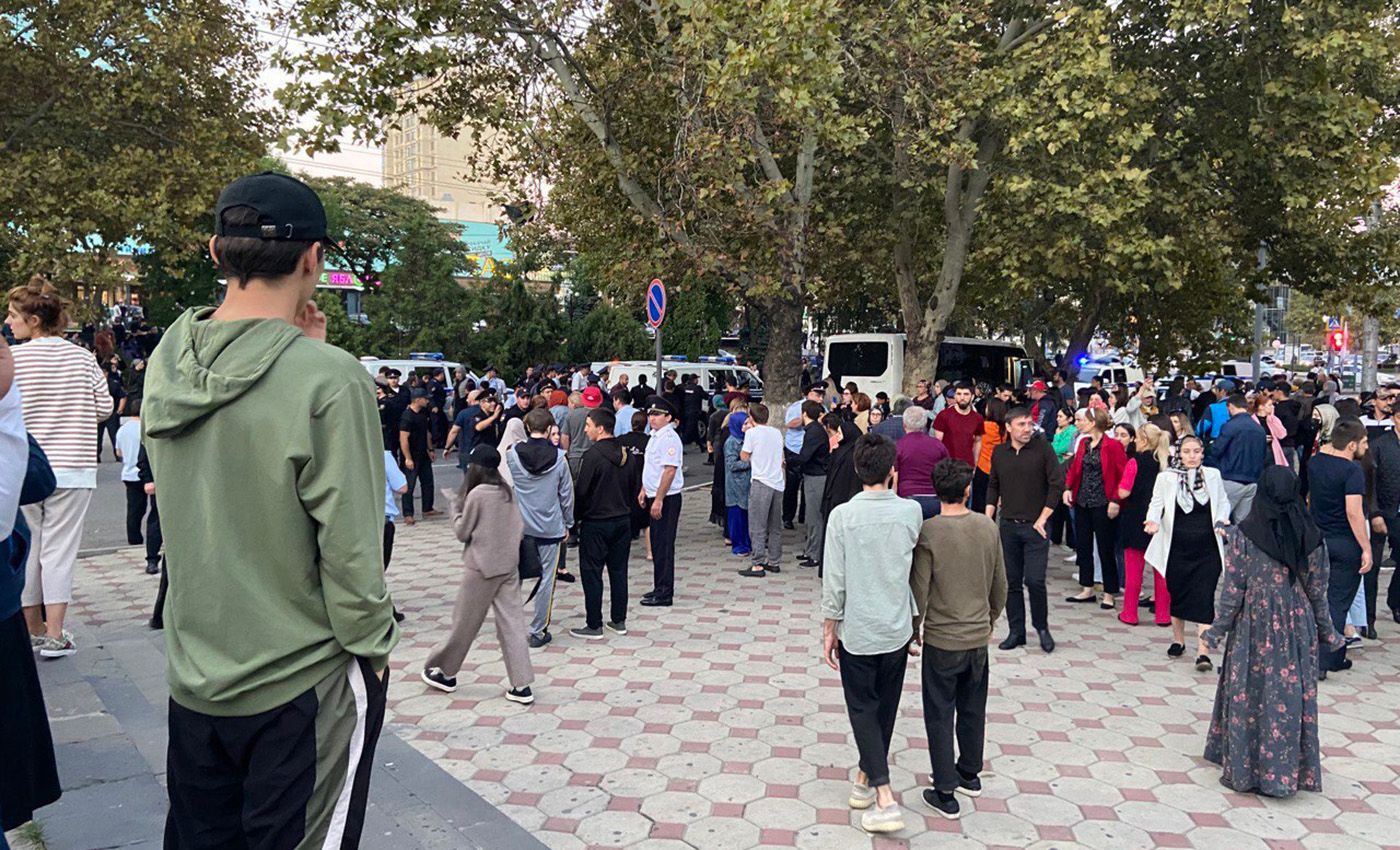 The Republic of Dagestan, bordering Georgia and Azerbaijan in the Russian North Caucasus, is protesting the ‘partial mobilisation’ announced by Vladimir Putin. This Sunday’s protests resulted in road closures and clashes with the police. The protest gained particular traction in the republic’s capital of Makhachkala, where hundreds of women went out protesting the mandatory draft while men were altercating with the law enforcement officers.

On September 22nd, day 2 of the ‘partial mobilisation’, the inhabitants of the Babayurt village blocked the adjacent federal highway and protested outside of the local military recruitment center. Baza posted a video of dozens of men outside of the building expressing their opposition to the mandatory draft.

When people gathered for a spontaneous protest in Endirei, a settlement near Khasavyurt, the police fired shots into the air in an attempt to disperse the protesters. One social media video showed dozens of protesters—according to some reports, they even blocked the road connecting Makhachkala with Khasavyurt. Without citing sources, ‘Tut Dagestan’ Telegram channel puts the number of draftees in Endirei at 110 men, “including those who recently returned from military service.”

Early Sunday evening, the local ‘Sprosite Rasula’ Telegram channel reported that the military commissar of Khasavyurt met with the protesters in Endirei. He was joined by other local government officials, the regional attorney of Khasavyurt as well as the local police chief.

Amid protests, Biysultan Khamzaev, a State Duma deputy from Dagestan, travelled back to the republic to meet with the authorities, the draft officer, and local officials. “The meeting was dedicated to discussing questions in regard to the mobilisation proceedings, paying close attention to the responsibility of the local military recruitment center in performing careful and thorough selection of those eligible to be drafted,” states the press release.

On Sunday, protests also erupted in Makhachkala, the republic’s capital—on the day of celebrations of the city’s founding. Many of the protesters were women. The demonstration took place in the city center.

According to Madina, one of the protesters, she learned about the planned event from a local Telegram channel (she does not remember the specific one as there were multiple that were advertising the demonstration) which was urging citizens to gather at 3 pm at the city center. Dozens gathered at the place, everyone was standing in small groups, according to her.

“Most were women, but, unfortunately, there were guys there too. They had better not have come because they were specifically targeted [by the police]. At first we just stood there and there was no violence. Then a police van rolled up and law enforcement swarmed the place. At first they were calm and just tried to talk it out with us,” says Madina. “The women began pushing back, saying that they are against the mobilisation, that they do not want to send their sons to their deaths, that they were against the war itself, that no one attacked our country, and that we don’t want to be at war with Ukraine.”

Soon after the protesters gathered, violent confrontations with the police erupted. In the videos posted online, protesters can be heard chanting “No to war,” and “We demand peace.” One of the videos shows the women forcefully pull an arrested young man away from the police.

Videos show policemen violently detaining men. In one of the videos, a policeman can be seen striking an arrested man and receiving a forehead slam to the face from him in retaliation. “Fight him one on one,” the woman behind the camera urges.

“There was screaming and mass hysteria. Honestly, the police were extremely violent in trying to disperse us. Pulled us apart, threw people on the ground—basically, weren’t very cordial. One girl got pepper sprayed,” Madina remembers. “The men had it the worst. They were tased and kicked. There was actual fighting. I am afraid that these guys could get arrested for being violent towards law enforcement officers. And the women too for trying to save the men from being detained. That is also a punishable offence.”

The women were also asked to show ID and were taken to the police vans. Madina’s friend, who fled from Luhansk when the war started in Donbas in 2014, was detained that way.

“They noticed that she was Ukrainian—they were ecstatic, I guess they thought that she was a saboteur. They took her to the van, but she has an infant at home. She got married a long time ago, but her family stayed in Ukraine until they had to flee from bombing and the so-called ‘Russian World’. I understand her desperation: her family was in a war zone there, and here her husband will likely get drafted [to fight on the side of the occupants].”

Another one of her friends was also detained. Madina was able to evade the police.

The governor of Dagestan, Sergei Melikov, admitted to erroneous drafting of men who were not supposed to be mobilised. “I am aware that, since the beginning of the mobilisation, such mistakes have been made. However, a number of these cases arose due to citizens not notifying our draft centers of circumstances that grant certain men forbearance from military service in a timely manner. Aside from true facts, there is undoubtedly a lot of fake news in regard to this issue that are being spread by our enemies in foreign-created online communities,” Melikov stated, claiming that the admitted mistakes have been corrected.

The official added that the local government representatives responsible for erroneous conscription of men who don’t fall under mobilisation orders “will personally face consequences.”

Madina from Makhachkala claims that “too many men fall under the mobilisation orders, especially those from rural areas.” She personally worries for her older brothers. However, she took part in the protest because she opposes the war in general.

“This is my position as a citizen and has been since the war started. I didn’t just come to the realisation that things were bad now that the mobilisation began. Now that this is our reality, I have decided that I could not stay silent any longer.”

Dagestan has lost the most servicemen to the war in Ukraine of all Russian regions—at least 306 men, according to the latest update of our count. 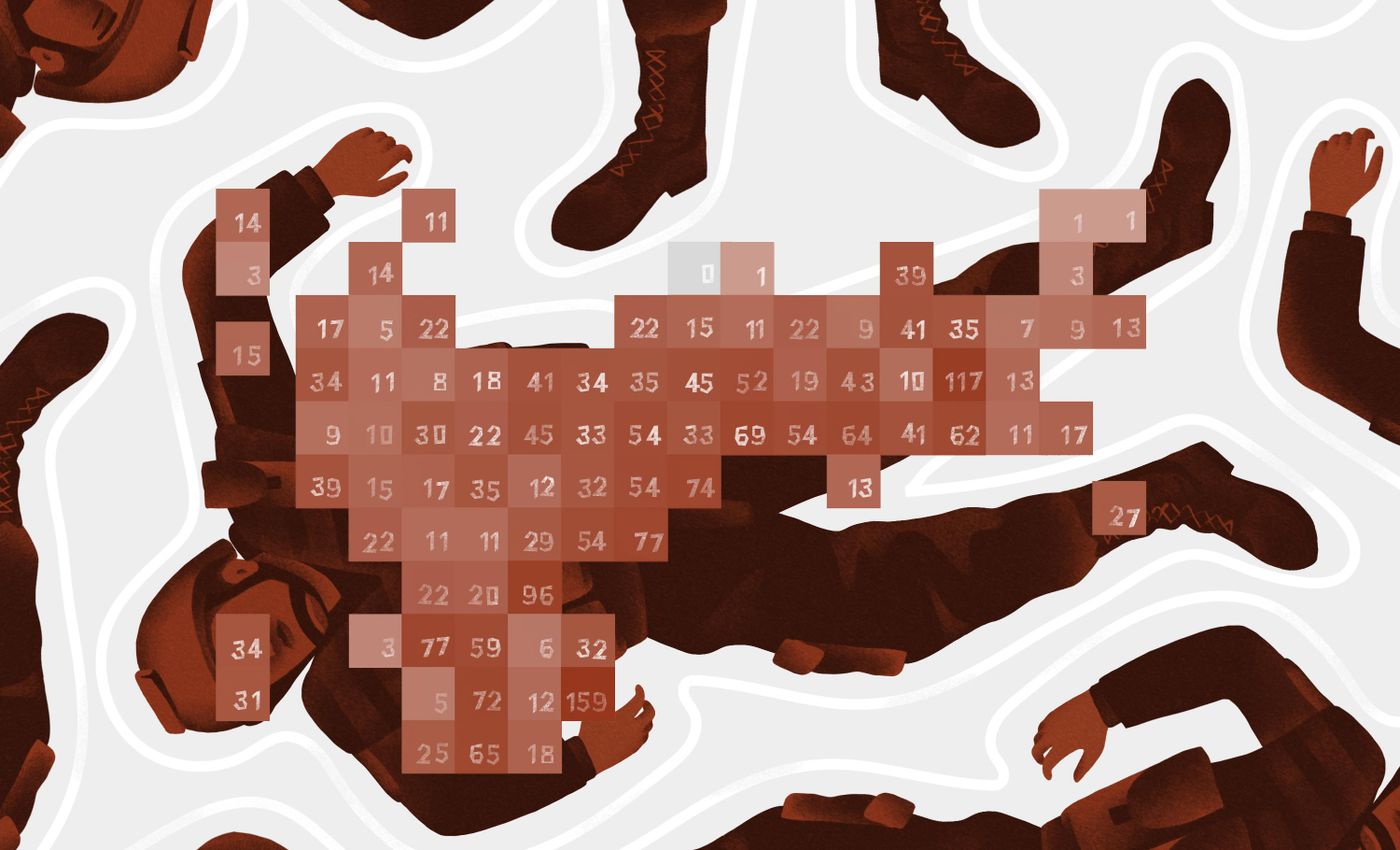 By nightfall on September 25th, tens of protesters remained on Gamzatov street, most of them middle-aged women. Mediazona reporter observed a policeman demanding that the people disperse. “It is because of you that men are being detained,” the officer exclaimed. Another policeman yelled: “Go home before we detain all of you too.”

“Why are you taking our men? Why don’t you go [fight in this war instead]?,” one of the women replied.

“That’s the purpose of being men, to protect our homeland,” an officer retorted.

In the course of a prolonged altercation with policemen, a few women were detained. “She was told to go home 20 times,” one policeman made an excuse while escorting a protester to the van. The rest, however, did not rush to disperse. One protester wondered: “Why should we send our children to fight this war when they don’t even know how to use a weapon? This is not our war!”