“Whoever hands me a weapon, from this weapon will perish.” An industrial welder from Chelyabinsk quit his job after his colleagues were mobilised
Никита Сологуб
Nikita Sologub
21 October 2022, 23:38 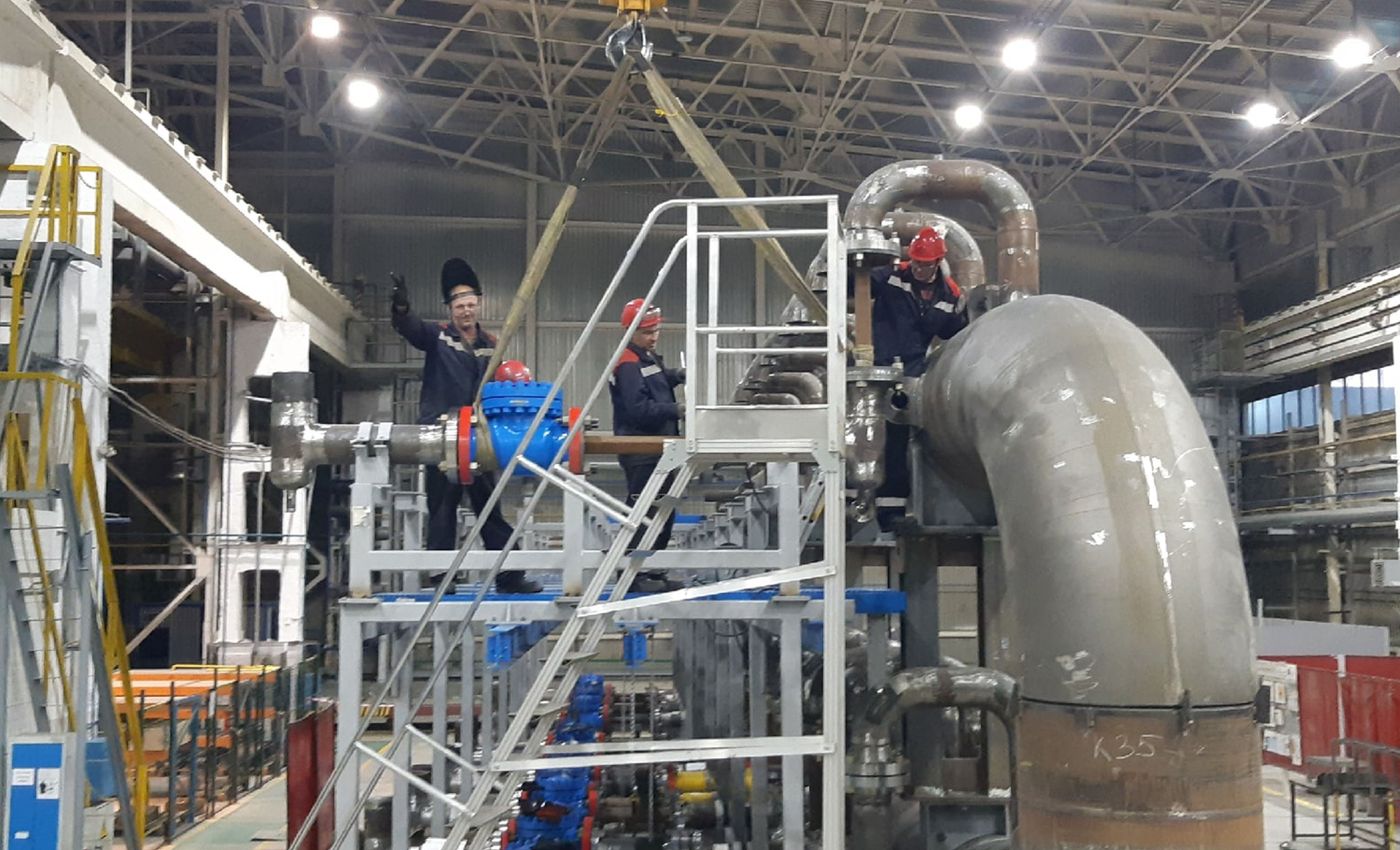 36-year-old welder Alexander Levanov has been working at the Trubodetal welding plant in Chelyabinsk for four years. In 2020 he was laid off twice (Levanov was not afraid to criticize the management, and filmed how his superiors responded to his questioning the layoffs) but succeeded in retaining his position by launching legal action. In 2021 he was arrested after attending a rally in support of Alexei Navalny, and since the start of the war he has openly criticized the Russian state on social media. After learning that two of his colleagues were mobilised, Levanov penned a letter of resignation accusing the management of “sending their employees to war, or, more precisely, to slaughter,” and suggesting that they “go burn in hell with your Tsar Putin!” This is his story.

“They sit up on their high horses while we toil away.” Conflicts with management

As soon as the war began, we were all promised that there would be lots of work. We would see the fruits of this conflict, but none of this really happened. We’ve been following the same order all summer long. And I’ve been reminding management where they stand and where they’re screwing up. They fired me twice for this, and I came back to work through the courts. The first time they tried to get me for “absenteeism”, and the second time, for apparently being rude. This was all fabricated. It was just that when I criticized them, I recorded it on camera. They tried to take away my bonus for this.

In February 2020, Levanov was fired for absenteeism, although he was at a professional development seminar. Later in August, he was laid off again for non-performance of work duties without valid reasons, although he had a disability certificate. A local district court sided with the welder and reinstated him at work with compensation.

I’m just tired of sitting silent, listening to them drone on about how we are one big team, when in fact we are not. They sit in their air-conditioned offices in the summer heat while we toil away. And they mess up a lot—also the draftsmen and foremen. They drag the production out as best they can. I’m just an average welder, and it’s obvious to me: we start building something, and then we have to pull it apart, and it turns out the whole thing was a faulty design.

And of course, our salary depends on what gets done. If there is work, a few projects for example, we don’t go out seeking extra. Sure, the company incentivizes it: they offer bonuses, give us sports training sessions, but oh wait…

Recently we had this little basketball competition, and winner’s prize was just amazing, I gotta say. They gave them a can of beer and a pack of crackers! Of course, we had way better prizes before. This was just a spit in the face, a proper anti-motivation.

And thanks to the lack of orders this year, my coworkers are often sent to other departments. We are paid with a flat rate plus a premium, but when you get transferred, they just pay you the unit average. So, if one month you’re transferred to one new department, and the next month to another, your wage can suddenly drop—lower and lower and lower. Plus, we have additional vacation days as hazard pay, and these are also being reduced.

It seems like an assortment of small bits, but it all adds up, and all of a sudden your salary is down 10,000 rubles from what you were promised. Earlier we would be transferred probably just once every six months, and things were pretty stable. And now we have fewer orders, because of the sanctions. At the start they promised us China would help, then Belarus, then that we’ll start coming up with technology ourselves—well why didn’t they do that in the first place?

“I know that for these guys, it’s certain death.” Mobilisation and decision to quit

When the mobilisation began, I was on sick leave. On October 1, I came back on shift and a few people were already gone. Anyone who wasn’t automatically called up because of their age had to go down to the draft office, and then they all pretty much returned to work. But those are the foremen—the welders were sent off. These guys are all young: one has a little daughter, and the other just got married. Now they’re at a training center in Yelan, in the Sverdlovsk region, 1,000 miles from Chelyabinsk. I was there for my mandatory service, in the tank forces. Now at the factory we’re down to two teams of 15 welders, minus two lost to the mobilisation.

Fifteen of some seventeen hundred employees—it doesn’t seem like much, but the scale isn’t that important. What matters is that the employer could have perfectly well refused and told the draft office to do it themselves. But instead, they invited the military commissars to the factory. So, these guys came in that morning just to do their jobs, and instead were handed a summons.

If they were handed this summons somewhere else, say, at a store or on a bus, it’s without doubt a different question, I personally might not have been so concerned. But our bosses are actually participating in this! And to me, this makes them the enemy. I’ve got a finger on the pulse of this situation in Ukraine, I see the kinds of weapons they’re getting from Europe. And I know that for these guys, it’s certain death. I’ve already lost a friend out there, a contract soldier, who went out with one of the invading companies on February 24.

I spoke with the father of one of the mobilised men that same day—he also works at the factory—and I just felt defeated. I realised I couldn’t work there anymore, my conscience wouldn’t allow it. So I wrote this letter, handed it to the supervisor that day, went off on sick leave, and when the boss came back on Monday, he signed approval and returned it to me.

The management of the plant gave me two weeks off, and then I got sick again. I’m already supposed to be back today and tomorrow, but I’ve decided not to. I told them I will take it at my own expense, for “family reasons”. I went, handed over my overalls, my tools, and that was it.

I’m happy and satisfied, and my heart is at peace. I’m now just worried about the guys. They don’t have any means of communication out there. Otherwise, I would explain to them what to do, since I served [in Yelan] and know the ropes: run to the dining hall, find the bathhouse, see? A little further there’s a fence, then a swamp, go around it to the right a bit and from there, run!

In January 2021, Alexander Levanov attended a public rally in support of Alexei Navalny, for the first time. He was arrested and jailed for thirteen days. At the end of the same year, an administrative offense report was drawn up, under article 20.3.1 of the Administrative Code (incitement of hatred) for using the word “garbage” in the comments on VK. The court stopped it, however, ruling that he only expressed a negative assessment of “a group of persons who are police officers.”

In July 2022, Levanov was fined 90 thousand rubles for reposting Navalny’s appeal to take to the streets against the war, which was made on March 2.

I think that if I had been at the factory then, they might have taken me away. I’m not necessarily in hiding. My position is as follows: whoever hands me a weapon, from this weapon will perish. Ukraine is not my enemy, and I won’t fight for this regime, for their yachts and palaces. They don’t send their children, so I won’t go either! I have someone to live for, someone to feed. And I’m needed by my family (wife and three children), whole, not in pieces, and even more so, not dead. But the worst case would be for me to become a burden for my family, that is, to have a crippling wound.

There was no “army defamation” in my statement, but I know that there is a criminal article—I have already received a fine of 90 thousand for the same administrative issue. I’m not going to pay it, and I won’t ask people for help, because this money will certainly go towards the war. Let them try to get it from me.

They came for me six months after the event—even though the administrative requirement is three months. I think they just want to threaten me, “shut your mouth, or we’ll do whatever we want!”. I know what this can lead to, and I can even see my fate ahead! Navalny is in jail, so what, maybe I will join him. They can’t put everyone away.

I think that there’s been enough silence. I don’t know, I’m not afraid of their jails. What now? Whatever is coming, no escaping it. My wife, of course, is against all of this, but she understands where it’s coming from. I tell her that I don’t want my children to live the way we did, like slaves, not free people. If they want to, they’ll fire you. You can complain, but nobody will listen. Nobody. If they want to, they’ll pay you nothing. Knowing what I know about our judicial system, our law enforcement, I don’t want such a future for our children.

When I was fired, my wife was pregnant, and we’d had another child not too long ago. But I forgave them, thought I could continue to work. But now my colleagues are being sent to certain death. I can’t take it. I don’t want to work for such people anymore. I still have my limbs in all the right places, and I’ll find some other work. Regardless, I’ll be better off than my dead friend.

On the job, it’s obvious that my colleagues think negatively of the war. But it’s easier for them to close their eyes, sit in their corner. But when you start showing them facts, evidence, they would say “we don’t need this!” They’re afraid, it seems. They can see what awaits them. They just stare at me, obviously with some care and compassion. They support me, but not openly. Somewhere out there—perhaps in the showers—they feel comfortable enough to speak freely. And then there are ears, snitches, all around, even those here at work. They’re just adults, who have just three or five years till retirement. They’re just holding on to work, so that, well, they’ll make it to retirement. Of course, I understand them.