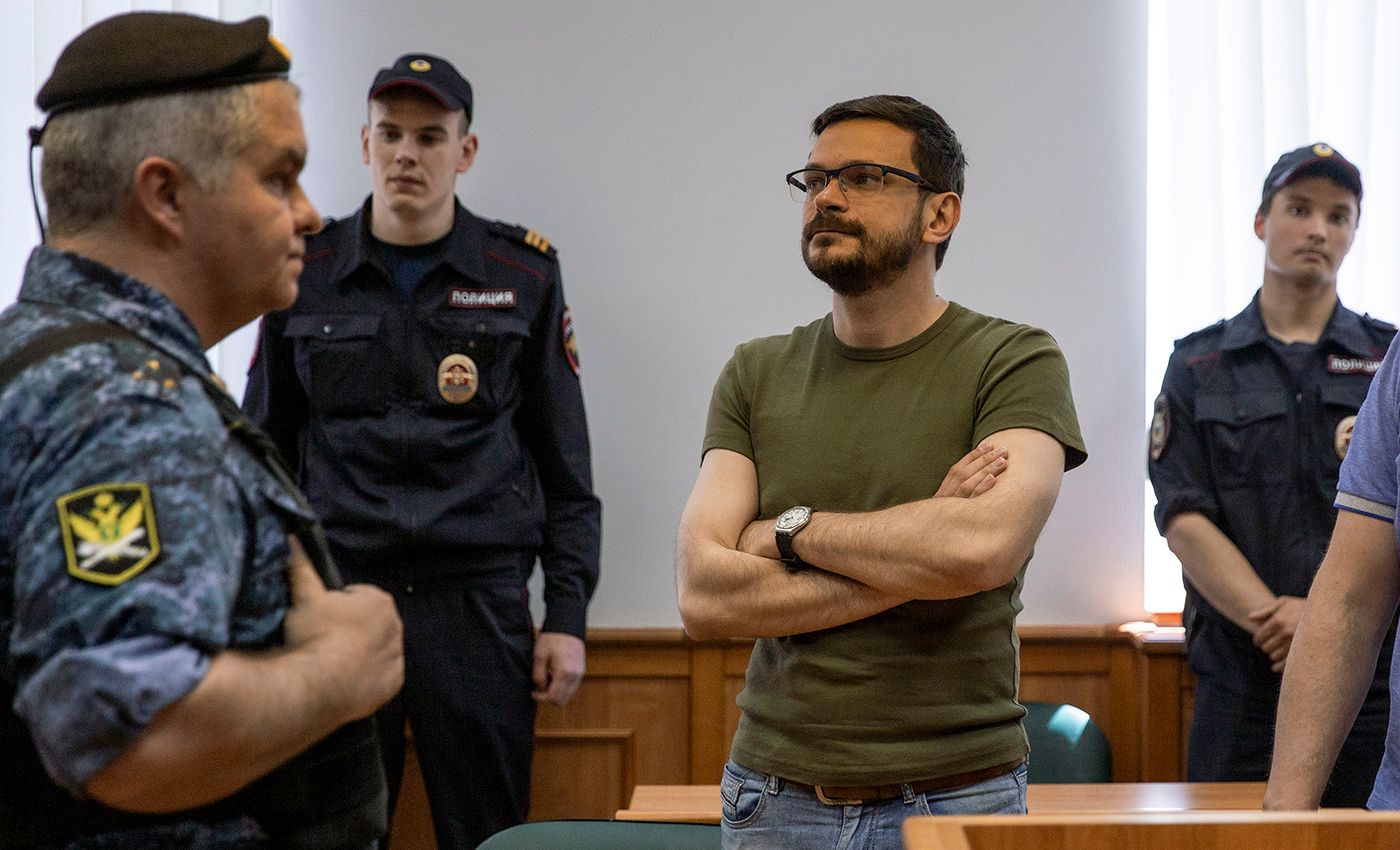 Opposition politician Ilya Yashin was supposed to be set free today after 15 days in Moscow jail over a bogus charge of disobeying a police officer. Instead, he was detained over a criminal charge of ‘discrediting’ the armed forces. Yashin’s alleged offence? Discussing the atrocities in Bucha in Ukraine on a YouTube stream. He is very likely to be arrested by a Moscow court tomorrow. One of the few politicians openly critical of the war against Ukraine while remaining in Russia, Yashin was adamant in his unwillingness to leave. We summarise his story.

The official reason for the criminal case is a YouTube stream about murdered civilians in Bucha. It was most likely an early April stream about the recently discovered atrocities.

“We've now all seen this gruesome picture of the city streets: corpses of civilians lying on the road, mass graves with civilians dumped and hastily covered with sand. It is a purely apocalyptic scene, you know, like in horror movies. Dead bodies with their eyes open, their hands tied behind their backs. A lot of murdered civilians were found in the basements and many did have their hands tied behind their backs, bullet wounds were found on the back of their heads. So it can be assumed that these people were detained, tied up, apparently tortured, and then shot in the back of the head, i.e. it looked like a massacre.”

Yashin also showed the BBC footage from Bucha and provided his analysis of the Russian propaganda that insists the killings were a staged 'provocation'.

Yashin concluded by warning that Russians who share evidence of war crimes on social media are facing a “direct threat of criminal prosecution.” The politician predicted that Russian authorities would “actually turn from threats to action.” “I think that in the near future we will see the arrests of people who have spoken out about the tragedy in the Kyiv region. I think there will be a lot of people charged with spreading fake news and discrediting the army.”

Yashin spent 15 days in jail over a charge of ‘disobeying’ police officers. The politician allegedly told them off in a Moscow park. This was an obviously bogus charge, journalist Irina Babloyan insisted. She witnessed the whole conversation with police officers firsthand and offered to come to the station to give her account, to no avail. Just before he turned 39, he was sent to jail.

Back then Yashin stated that the pressure is linked to the start of the municipal election campaign since the opposition was particularly successful in his district five years ago. “I'm not that crazy to get into an argument with the police... No one here is stupid, everyone knows perfectly well why opposition politicians are detained in the middle of the night in Russia.”

Yashin is one of the most prominent politicians critical of the authorities who have stayed in Russia. His political career spans nearly two decades: he’s been a part of a liberal Yabloko party youth wing and participated in political art performances; he was associated with the Oborona movement taking cues from the Orange Revolution in Kyiv. Yashin at the time was constantly harassed by the activists of the pro-Kremlin Nashi movement.

In 2008, together with Boris Nemtsov and other politicians, Yashin became the founding member of the Solidarnost movement. In December 2011, the rally against election fraud organised by Solidarnost in Moscow launched the largest protest movement in 21st century Russia.

After the murder of Boris Nemtsov in February 2015, Yashin has regularly criticised Chechen leader Ramzan Kadyrov—the murderers were close to Chechen authorities. Yashin had no doubt that it was Kadyrov who gave them the order. Last winter, he recorded a video linking Kadyrov to crimes across Russia.

“Look, Ramzan. I was born and grew up in Moscow. This is my country, I live here and I'm not going anywhere. I openly say that I'm not afraid of you and I have contempt for you. Because it was your thugs who killed my friend Boris Nemtsov. Because you’re trying to take my country back to the Middle Ages. Because you are wallowing in money and luxury at the expense of the rest of Russia. I understand that you have power on your side now. But I have the truth on my side, and it always wins. And however ridiculous it may sound to you, I will fight you using only legal means. Because I'm a civilised man,” said Yashin announcing the collection of signatures under a petition for Kadyrov's dismissal.

Yashin is a member of the Krasnoselsky district council in Moscow. In 2017, the opposition decided to focus on local elections and was able to sideline many pro-Kremlin candidates in the capital. Yashin and his associates won the majority in Moscow's Krasnoselsky district council of municipal deputies. He became chairman and retained the post until the summer of 2021 when he resigned due to “raising pressure” and “endless inspections” aimed to “paralyse work and destroy everything we built over these four years.”

In 2019, Yashin along with other independent politicians was banned from the Moscow city parliament elections. This triggered mass protests which were brutally suppressed by the police. People took to the streets almost every weekend of July and August of 2019, and the result was hundreds of detentions, dozens of beatings, and two dozen criminal cases.

In his later attempt to run for the city parliament seat in a by-election, he wasn't even allowed to register as a candidate, on the grounds of his “association with an extremist organization.” This was probably due to Yashin's ties to Alexei Navalny (they knew each other and worked together since early aughts), whose Anti-Corruption Foundation was banned as an “extremist organization.”

Yashin was a fierce critic of Russia's invasion of Ukraine, and one of the few who refused to leave the country. He constantly discussed his positions on social media and Youtube, not afraid to call the “special military operation” for what it is, a war. “Whatever Putin and his entourage choose to call it, it's a fig leaf, call it a special operation or any other synonym... denazification, demilitarization... This is war, and from the first moments, it was clear that it was war. For four months we've been witnessing this horror, four months buildings are being blown up, and millions of people are fleeing their homes in the hope to save their life. A sea of blood, a sea of tears, and, unfortunately, no end to this war in sight,” said Yashin in one of his last streams before he was arrested

In late April, Yashin's colleague from the Krasnoselsky district legislature, councillor Alexei Gorinov, was charged with ‘discrediting’ the army. Gorinov's offence was his remark during a council meeting about a children's drawing contest. “I believe that all the efforts of civil society should be aimed only at stopping the war and making sure that Russian troops withdraw from the territory of Ukraine,” said the councillor. Yashin was questioned as a witness in this case. The court sentenced Gorinov to seven years in prison.

In May, Yashin was charged with four counts of ‘discrediting’ the army on social media. Those administrative cases involved photos of American hippies protesting the War in Vietnam, quotes from Nobel laureate Andrei Sakharov against the Soviet-Afghan War, and a line from 1960s underground singer-songwriter Alexander Galich, "Countrymen, our fatherland's in danger, our tanks are in a foreign land" (which referred to the Soviet invasion in Czechoslovakia in 1968).

Neither the trial of Gorinov, nor the arrest of another opposition politician and his associate Vladimir Kara-Murza, on very similar charges, forced Yashin to leave the country. ”Frankly, it is ridiculous to discuss who is the first and who is the second,” said Yashin answering a question about a ’number one’ politician in Russia right now. ”One is dead, another one is in prison, the rest left. And those who stayed... Do you really want to name firsts and seconds? What is this, a competition? Is this is a line or something? To a police van? To the Investigative Committee? There's a line in one of the songs by Kirpichi: “I don't want to be a champion, I liked macaroni, and I will like macaroni.”

“My position is very simple. I'm not going to run and hide from anyone, and I'm not going to back down,” Yashin said after he'd already been hit with four ‘discrediting‘ charges. ”I oppose the war because I'm a Russian patriot. And in my view, it is those who have unleashed this criminal massacre who are in fact discrediting the army.”